There are no questions in Gertrude Stein. Many readers who notice this find it perplexing, possibly off-putting, since it is as difficult to write without questions as it is to read a text without them.

Why is the point of this blog post here, which proposes that questions aren’t simply reserved for humans, but the engine that runs “Why?” might be. Other species are capable of asking Why, but their curiosity is often quickly satiated. Because it lacks a mark indicating that it’s a Why, the following doglike thought is no longer a question — Where is the missing ball. “Where” is a general indication of place, but a question mark demands further explanation. Much of language begs for further clarification.

Children love questions, and so do I. I use them all the time in my critical writing. Given my status as a critic, I feel it is my job to ask Why. Therapists often ask Why. They will not explain for you. Is Stein therapeutic.

Today is International Workers’ Day. I spent it teaching and will spend the rest figuring out how I want to work. In this cynical day and age, we receive the invitation to avoid loafing with suspicion. Is the advisor is actually numbing me into complacency, hoping I’ll become a cog in the machine? Guess I’d better get back to work! But we forget that work is a nurturing aspect of our being. Yes, we must work, but also must work with intention. I view the worker with respect and dignity.

An advisor in a New York Times article about advising first-time Tinder users was said to have helped a garbage man in Westchester. She picked out new clothes for him, hoping he’d be more presentable to women. His before picture, a selfie taken from the driver’s seat of a municipal garbage truck, wasn’t apparently good enough. I thought he looked handsome. The guru sanitized his effect, leaving him just like the others, primed for dating. I feel for the garbage man and his future mate. He just wants to play with his dog and feel loved, but was forced into a photo shoot that will direct attention away from the impression of who he is: a laborer with a job that smells.

Many Marxists and Bernie Bros are accused of their laddish intellectualizing — “Mansplaining.” We all know what it’s like to be told what to do in a patronizing way. But as a man who keeps things to himself, I am called to wonder: Why not be proud of what you know, why not urge yourself to share it with others? Is this true of the affective dimension? I need to work, but I find myself distracted by emotional matters, and therefore I do not conduct my worker at full force. My work is intellectual, and the things that I know share space with my emotions. This is my excuse. Why not think with the body? I think better when I’m moving. I’ll bet the sanitized garbage man thinks better while he’s moving, too.

I’ve always wondered, silently, to myself, if hipster Nostalgia was really a longing for lost supremacy (both “white” and “male”). As if lurking underneath that nostalgia for 1950s (to take one era as an arbitrary example) fashions and furnishings was something more sinister. The video above (and this blog post) reminded me of my suspicion.

The word “nostalgia” is often associated with a certain level of innocence; we often think of a nostalgia for childhood. Christmas, for example, is a holiday fueled by nostalgia, with its images of children awaiting Santa’s cadre of presents. But “nostalgia” does possess a sense of discomfort, as the word itself is a cognate of nóstos, or “homecoming,” and álgos, or “pain/ache.” So, a longing for childhood experiences of Christmas could also mean that you’d like to come home to a safe place in which Santa provided for you. In other words, you’d like to go back to a time when you were taken care of, comforted, spoiled.

I really did miss the boat when it came to The Hunger. I suppose it’s too late for a 31 year old to get excited over David Bowie playing a dying vampire, or Catherine Deneuve making out with Susan Sarandon writhing in a pool of blood. In reality, the film is a complete exercise in style over substance. I should have heeded the warning of the opening credits: Bauhaus singing in a dimly lit club while a caged monkey gets slashed to death. The 80’s music video clichés didn’t stop there; they just came a-tumbling, including the aforementioned love scene (“Cradle of Love,” anyone?).

But of course the Gothic is really an aesthete’s game if one reduces its definition to a “mixture of horror and romance,” which The Hunger most certainly is. It reminds me of the kind of thing that used to interest me as an undergraduate (my senior thesis that basically argued that “sex and death are the same thing! Ooohhhh!!!”). I just can’t bring myself to be engaged with something so horribly melodramatic and ultimately silly.

My mind tends to wander during films like this. I thought of the “discovery of blood” by William Harvey in the early 17th century. How then, could vampire lore have existed if everyone thought that the body was ruled by the humors? This memory was based on a careless misreading of something I had encountered earlier in the day. Turns out Harvey discovered blood’s circulation, not its very existence. I then worried that most of what I read is being misremembered. Sounds about right.

As the film finally ended, I noticed Bauhaus were credited as the “Disco Group.” That too sounds about right.

I hope they don’t wind up waiting too long. 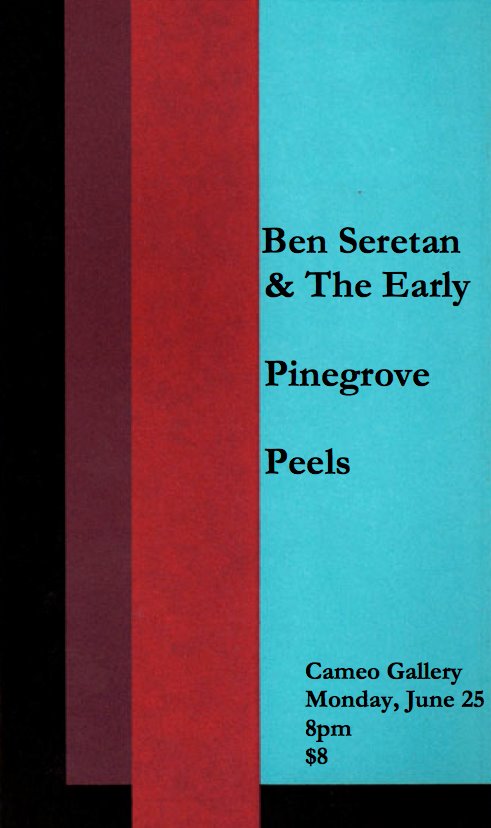 My band is playing tonight at Cameo. Come on out to hear the new jam, just in time for the beach.