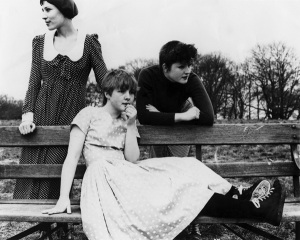 I have started to notice life here in New York is beginning to come full circle. People are beginning to crop up that I haven’t spoken to since 2005 (not on Facebook, in real life). A company that I used to work for solicited David for his business at work. And now the soundtrack of my later college years gets a reissue…

I first discovered Dolly Mixture in a flurry of classic post-punk self-education. I had long since consumed anything with the descriptors “jangly” and/or “girly” in a manner nothing short of voracious, but Dolly Mixture had somehow escaped from notice. I know now that they held their 1983 record Demonstration Tapes in obscurity as the holy grail of post-punk records (there were only 2,000 copies of this double album pressed, hand-signed by all three band members). I was told that Demonstration Tapes would go for hundreds on eBay, a fact that appealed to their sense of rarity. Though I had the record collector bug in me for about 5 months of 2004, I hadn’t much interest in hunting down a copy.

So I did what any 21st century music geek would do: I went on SoulSeek and downloaded it. Once I copied it to CD-R, it hardly ever left my discman. The songs were immediate, infectious. The songwriting was of extraordinary quality, nearly matching that of the record that it modeled itself after. The fact that Demonstration Tapes was never a hit struck me as an impossibility. And if you ever received a mix CD from me during that time, surely you heard “Will He Kiss Me Tonight?”, a song that I later learned to have been a cover. And with time I learned more things about the band: a St. Etienne connection, a band called Birdie, whose record I bought during my aforementioned Twee Period and enjoyed immensely. The fact that I couldn’t connect the vocalist escapes me. But then again, I can be pretty oblivious.

But much to my delight, the soundtrack of the years 2003-2005 has come back to me. (With bonus tracks!) And what strikes me for the first time are the the lyrics. I always loved the line “I know my way down the side streets now / Away from the places that you walk.” Who doesn’t have a Side Street route? But now: “So many moments gone / Lost in days that pass so carelessly / If each one had a song / Hear the first few notes and suddenly / I could remember things recorded until now / Reach out and catch the sound / Before the world has turned around and taken it away.”

And of course, I’m glad they recorded them.