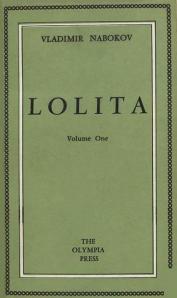 This weekend I finished my first Nabokov book. I suppose my mental loins were never fired up due to a certain disinterest in anything too “exposed,” or anything that my peers held in too great of an esteem: every 20 year old seemed to love Nabokov. This I took as a sure-fire indication that he was “easy” to read, therefore beneath my intellectual standards. I have become much lighter in my old age, and while I’m not quite at this point yet, I do find that my snobbery has largely waned. I will, as it stands, read almost anything.

So the Top 100 Readers’ Favorite Books table at The Strand is fair game. And Lolita beat out The Sound and the Fury as the book that I wanted to stop saying that I had never read (along with a glowing review from a friend whose opinion I hold in high regard). So, I started and finished it with an eagerness and obsession that I can only summarize as one that, as you gather, has inspired me to start a new blog. “So good it’s bloggable” may be the correct modern expression. It’s filled with beautifully obsessive language that asks its reader to consume obsessively. Accessible? Sure, but I imagine most readers missing the point back when it was published, much like many people miss the point of my favorite movies. It’s a case of the artist being understandably mis-marketed. After all, why wouldn’t the publisher find it lurid, pornographic and morally depraved? Humbert Humbert was, of course, a sick man. A spade’s a spade. And my pretensions of it being “easy” were completely unfounded. This book is among the best literature I’ve ever read.

Besides walking around Park Slope with my ailing beau, I also helped a friend out by being an extra in her movie. The shoot was all the way uptown near Columbia University. Trekking from Park Slope to Morningside Heights is no easy feat. But it does enable one thing — undisturbed reading time. As I made the journey up, I was fully aware of the power that my book could have in keeping people away from me: antisocial behavior that Humbert Humbert surely would have approved of (if he had seen his “self” as precious as his dear Lolita). But no one thought much of me and my book. Surely they’re aware of the significance?

But, I realized, no one notices anyone on a crowded train here in New York City. A thought that used to somehow comfort me I now find unnerving. But on I went, finishing my book in relative peace. And yes, I will be reading more in the future.